Wow, what a race! The inaugural Salomon Glen Coe Skyline certainly lived up to its claim to be amongst the toughest and undoubtedly the most technical race in the UK. Sure, there are ultras that are well over double the distance, but none of them pack as much technical and tough terrain into their length as this one, and I can't imagine any of them being quite so mentally as well as physically draining. This is a day I'm not going to forget for a long time!

I knew it was going to be a tough order to get my fitness up to 52-km 4200-m-ascent levels when I entered the race back in April, but by setting myself a clear plan to get some good quality miles into my legs over the summer, I was relatively confident come race day that I'd at least finish, and to be honest, finishing was my only real goal. Nonetheless, my nerves built in the preceding week and come Friday evening, whilst watching a selection of films put on by the organisers in the Glencoe Ski Centre café, my mind was full of doubts, compounded by the realisation of the quality of the field; Skyrunning world champion Emelie Forsberg was sat just across the room, and the entry list was full of other notable names such as the ex-Cuillin Ridge record holder Es Tressider and this year's Dragon's Back winners Jasmin Paris and Jim Mann. What was I doing here!?

Distance aside, the other part of the route that was playing on my mind was the technical nature, particularly the hardest graded part of the day; Curved Ridge onto Buachaille Etive Mor, an exposed Mod climb. I've soloed it before and didn't remember it causing too many problems, but I was acutely aware that my memories of climbing routes are always easier than they actually are, and also this time around I'd be in flexible running shoes and not big boots. The weather was good on Friday, and so after driving up from Carnforth in the morning, Lorna and I went for a quick recce of the route to alleviate these nerves. To my relief, I found the scrambling easy and enjoyable and the crux corner didn't pose any problems at all. Phew! 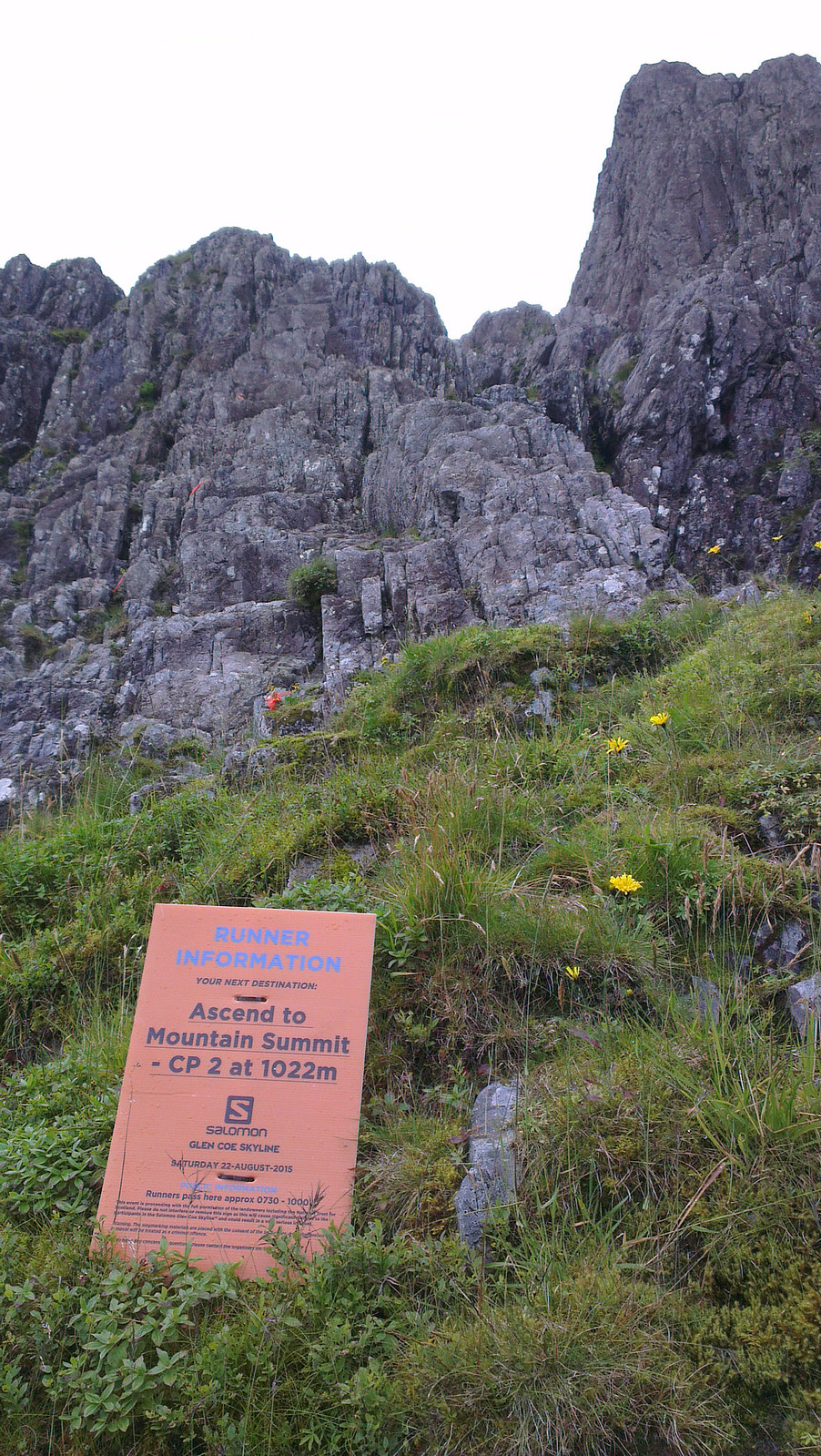 Base of Curved Ridge on Friday's recce.

The race begun at 7am the following morning, and despite the best efforts of Glencoe's midges to dampen the mood, the atmosphere was electric. Plenty of midge-hardy supporters lined the first 7 km along the West Highland Way, before we branched off on the steep climb up towards the base of Curved Ridge. The organisers had flagged a devious but brilliant route up to the ridge, avoiding almost all of the loose scree and rock and thus minimising the chance of rockfall. Many had suspected the ensuing bottleneck that occured going up the ridge, and so the pace along the West Highland Way was brutally fast for such a long race. Unfortunately, I found myself trapped behind the bottleneck, stationary for a good 15 minutes and probably loosing more like 30 minutes on the speed I thought I could do the route in. No matter though, the banter was good on the ridge and it was nice to enjoy its fantastic position at a leisurely pace, before settling down into race mode come the summit of Stob Dearg.

Lorna had a particularly early start that morning, and was waiting for me just after Stob Dearg, a location picked strategically so I could hand her the helmet I'd worn going up Curved Ridge. To wear or not to wear (a helmet) was a tough question I'd been contemplating quite a bit in the previous weeks, and Curved Ridge is definitely on that borderline terroritory (especially when the ascent to it avoided the loosest parts). The organiser's stance was "helmets are advisable but not mandatory" and in the end I heeded their advice and went with the "better safe than sorry" attitude, though I was one of only a handful that did. 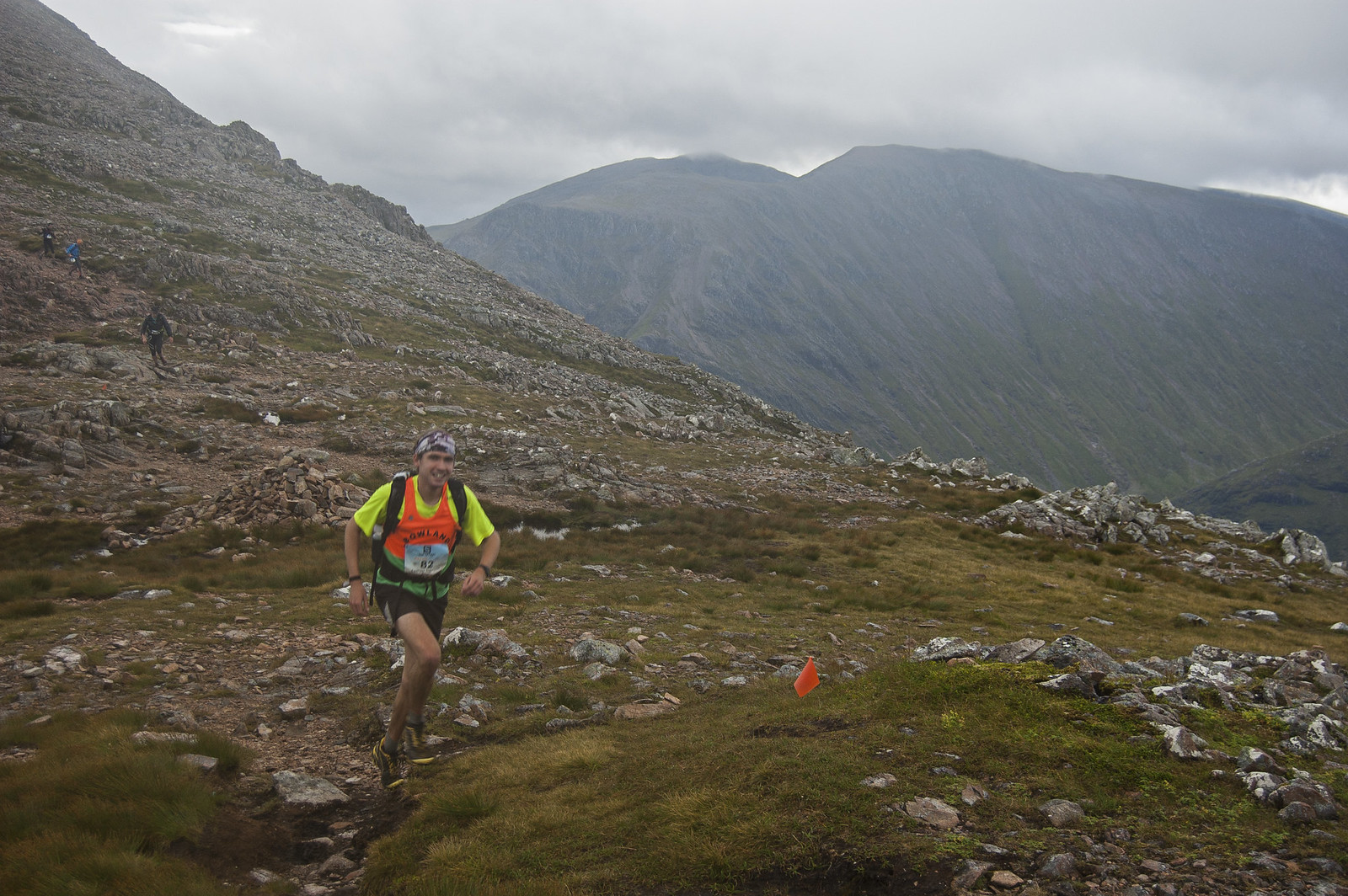 Just after the summit of Stob Dearg, still feeling fresh!

My legs started aching a bit and a couple of old injuries started nigling as I made my way over Buachaille Etive Beag's col and down to the Lairig Eilde, but I wasn't too concerned as previous experience told me my legs have a habit of sorting themselves out the longer I run for, and indeed by the time I was climbing the steep grassy slope onto Stob Coire Sgreamach's eastern flank, the niggles had disappeared and I was feeling strong again. In fact, I went on a bit of an overtaking spree and took courage in the fact that I seemed to be fairing better than a lot of others around me.

The descent from Bidean wasn't at all pleasant, compouned by a few showers passing through making the paved sections of the path lethally slippery. My knees were feeling the 1000m of descent I'd just done when I arrived at the road crossing, and I was glad to be soon going uphill. Lorna met me at the checkpoint with extra supplies, and I had a very welcome cup of tea and bite to eat whilst I updated her on my race so far and she updated me on what was going on upfront.

I'm normally a fan of steep ascents, but the climb from the A82 to Sgorr nam Fiannaidh was brutal. 900m of relentless trudging up grass at a constant gradient, broken up only by a loose scree gully near the top; this race certainly has a bit of everything in it! My legs breathed a sigh of relief as I embarked on the Aonach Eagach, which was now soaking wet thanks to a few heavy showers that had passed through. Staying focussed was difficult after having already ran 32 km, amplifying the exposure and making the technicalities trickier than normal. To say I enjoyed the ridge at the time might be a bit of an over-statement, but I certainly did relish the situation and atmosphere of its many superbly airy sections, appreciating how lucky I was to be racing along such fantastically involving terrain.

I had paced myself well, and still had energy left come the summit of Am Bodach. It was great to stride out on the final grassy hills, overtaking a few more weary souls, before settling down for the never-ending trudge back along the West Highland Way. The finish was excruitiatingly uphill and I used every last bit of energy I had to make sure I kept running until the end. My final time was 11 hours 20 minutes and 2 seconds; I had secretely been hoping for sub-12 hours and so (especially given the bottlenecks up Curved Ridge and the Pinnacles on the Aonach Eagach) I was more than happy with my 71st place. Joe Symmonds won the race in an impressive 7:36:21 and Emelie Forsbeg was literally minutes behind him in 2nd place overall, 7:44:19. Fellow Bowland Rich Mellon was on top form and managed 15th place in 8:41:36. 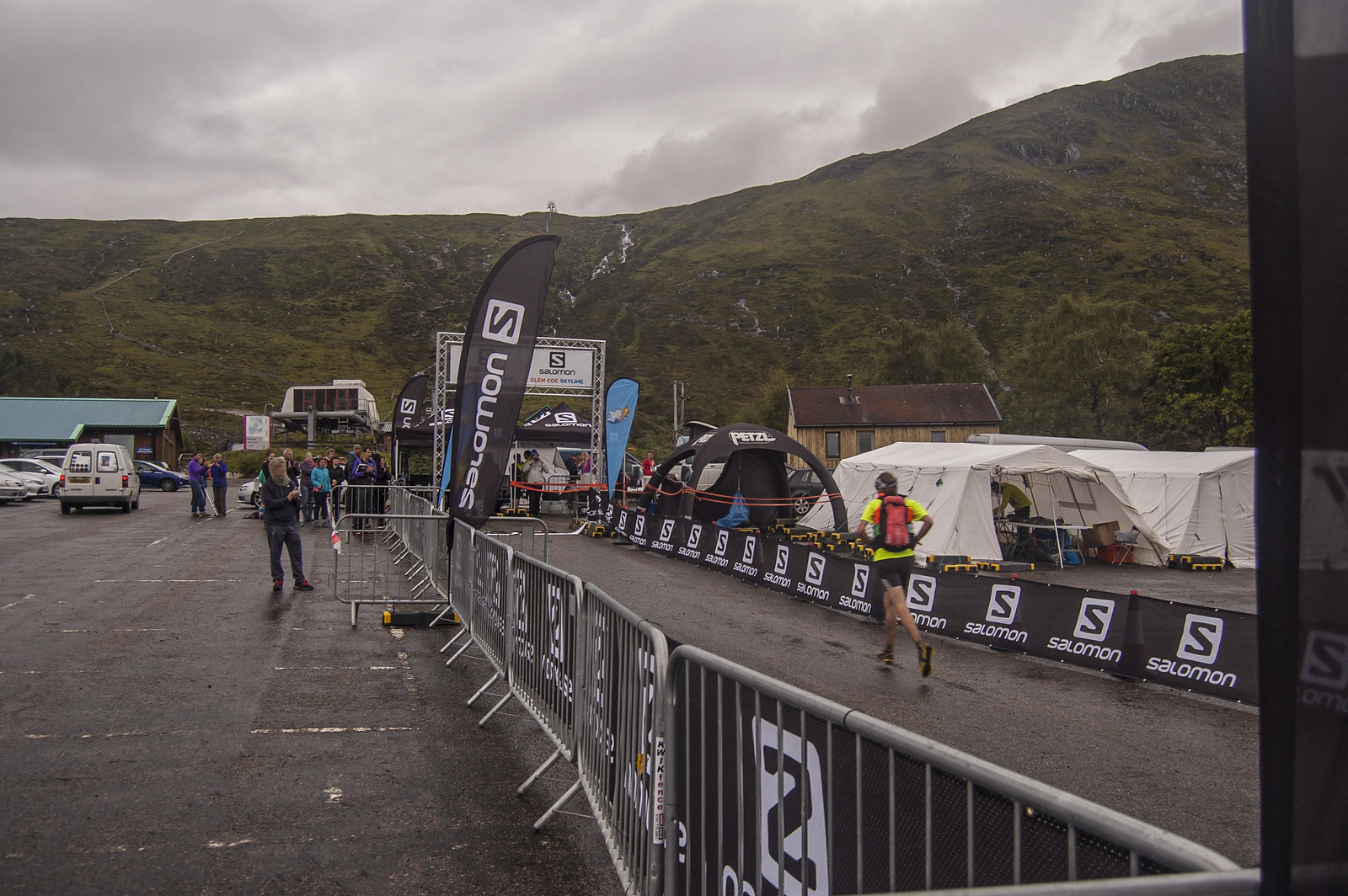 Final few metres to the finish.

The race received a fair share of criticism before it begun, both from sensationalist media outlets who know little of the outdoor world, and experienced and prominant individuals within the outdoor world. The mainstream media labelled it as a "death race", whilst more level-headed opponents cited concerns that the race would cause mass disruption to other walkers and "turn the hills into a race track". The predications of disruption didn't seem thought out at the time they were made; it was clear the course had been planned with this in mind and entries were limited to 200 people in any case. Come race day and the organisers' plans worked perfectly: The only bottleneck, on Curved Ridge, was at around 8am, early enough so that there weren't any other parties on the ridge, and by the time we'd reached the Aonach Eagach we were spread out enough that walkers coming the opposite direction could easily pass us. The attitude of other hillgoers on the day was extremely positive and they seemed to be enjoying the novelty and excitement of seeing us out running, rather than cursing under their breaths at all these damn runners getting in their way. Information signs had been placed extensively around the area warning other recreational users of the race and we were briefed extensively that we had no more right of way that anyone else out in the hills.

The post-race buzz has been incredible and its obvious to see that it is set to become one of an elite list of must-do races, not just in the UK, but the world. A fellow competitor I was speaking to in the shower block summed it up nicely: "the field's never going to be as easy as it was today". I wouldn't be surprised if the name Kilian Jornet appeared on the entry list next year (and I for one would love to see how fast he can do it in!).

. The results
Comments powered by Disqus