The Extremities Inferno is a cost-effective and versatile glove that excels in Scottish winter but is equally at home in a variety of different conditions. It's one of my most-used pieces of kit and has lasted the test of time commendably.

This pair of gloves fit well and truly into the "tested to destruction" category; since I got them back in the winter of 2010 they've been used for absolutely everything, from walking and climbing in Scottish winter, to summer Alpine mountaineering, to cycling 20 miles to and from university every day, to fell running in both summer and winter. They've probably seen more use than any other item of gear I own (except maybe a Buff) - and that's not sat-in-bag use, that's hard graft in the most serious of conditions - and though admittedly they are starting to fall apart, I'm seriously impressed with how long they've lasted.

The glove market is an absolute minefield. There are gloves for about every conceivable situation, complicated further by the fact that how warm people's hands stay can mean you having freezing cold hands in a big pair of mitts whilst your mate is toasty warm in his liner gloves (the lucky git). So, understandably, where the Infernos fit into the market isn't easy to define. But nonetheless I'll give it a go. But firstly, I must state that I get very cold hands compared to most people, so if I say that a pair of gloves are warm, they're warm!

And indeed, the Infernos are at the warmer end of the glove market. Except for Extremities' aptly-named "Super Inferno", which boasts double the insulation of the Inferno - they are one of the warmest pair of gloves (not mitts) that you can buy. They're filled with 5 oz (140 g) of Primaloft insulation and the outer shell is waterproof (unspecified brand). They boast a "textured palm for improved grip" (albeit a very marginally improved grip), which also gives the glove a bit more durability. They're not a super-hardwearing leather glove like those that tend to be marketed towards winter/Alpine climbing, but as I'll go on to explain, there's no reason you shouldn't use them in such situations. For me, they get most use with a PowerStretch liner glove during Scottish winter (unless things get seriously gnarly and the mitts come out) and as an "emergency" glove during the summer months.

As far as gloves go, you aren't going to get much warmer than this. Even the aforementioned Super Infernos with double the insulation aren't going to offer you a huge gain in warmth (keeping your hands warm is as much about keeping your core warm and how warm your hands feel doesn't scale linearly with amount of insulation). They're completely windproof, and Primaloft does a fair job of staying warm when wet (more on the "waterproofness" later). The outer also freezes up nicely in sub-zero temperatures, offering an extra layer of insulation; perhaps not as good as a pair of Dachsteins in this sense, but better than a pair of leather gloves.

Not a single pair of gloves out there is truly waterproof (for a start, they've all got a gaping hole where your hand goes), so first you have to accept that a "waterproof glove" is a misdemeanor. Instead, take waterproof to mean "will fend off water for quite a bit longer than a non-waterproof pair of gloves". It's a good feature to have when in light rain (or rain showers) or when you'll soon be above the freezing level and rain will turn to snow, but in heavy and persistent rain they do soon become sodden and due to their waterproof lining take forever to dry out (after a complete washout even a couple of days on the radiator won't be enough!). In fairness though, all gloves of this type suffer from the same problem, though I would only grade the "waterproofness" of the Infernos as about average; i.e. if you're after a super-waterproof glove, then these aren't for you. Personally though, I think a better approach is to buy a pair of waterproof over-mitts which do the best job by far of keeping the water out (as long as you make sure your jacket sleeves go over the top of the gloves...).

I've already hinted that they gloves are surprisingly durable, especially given the use I've put them through. Whilst they're not marketed as a bombproof climbing/mountaineering glove (like leather-reinforced examples such as the Rab Guide or the Mountain Equipment Assault) and I can't pretend that they're quite as durable, they've served me perfectly well fulfilling those roles. Especially given the cost...

In the day and age when it's not uncommon for gloves to be priced at over £80 a pair, it's refreshing that Extremities have managed to keep the cost of the Inferno down to a reasonable £30 (and you can get them cheaper).

The main problem with Primaloft insulation in a glove is that it's incredibly slippy. And by that, I mean that if you place the glove against a hard surface, you can slide you finger up and down and the insulation moves up and down whilst the outer shell stays stationary. This obviously isn't good for dexterity and is one of the glove's main downfalls. On the positive side, as their outer shell is a soft fabric, you do get a much better feel of whatever you're holding onto than you would in a leather glove.

My main complaint here would be that the gloves don't include a drawstring to pull them tight over your wrist, but I see that the latest version of the gloves have added such a feature. Extremities obviously listen to their customers! Another missing feature is the lack of a little clip on the fingers to clip to your harness orientated so that snow doesn't gather inside the glove.

They weigh around the 150g mark, which is about average for a pair of fabric insulated gloves but quite a bit lighter than more hardworking leather gloves.

The Inferno are an excellent value-for-money warm pair of gloves that excel in Scottish winter but perform equally as impressively for a multitude of different activities in a variety of different climates. Whilst they don't have the durability of gloves made specifically for climbing, and even though their dexterity is a bit questionable, they're still a good option and their real selling point is their price. I've been using a pair of these - over Power Stretch liners and with Super Inferno mitts in my bag if it gets too cold - as my go-to winter glove combination for the last four years and have no qualms in recommending the combination wholeheartedly. 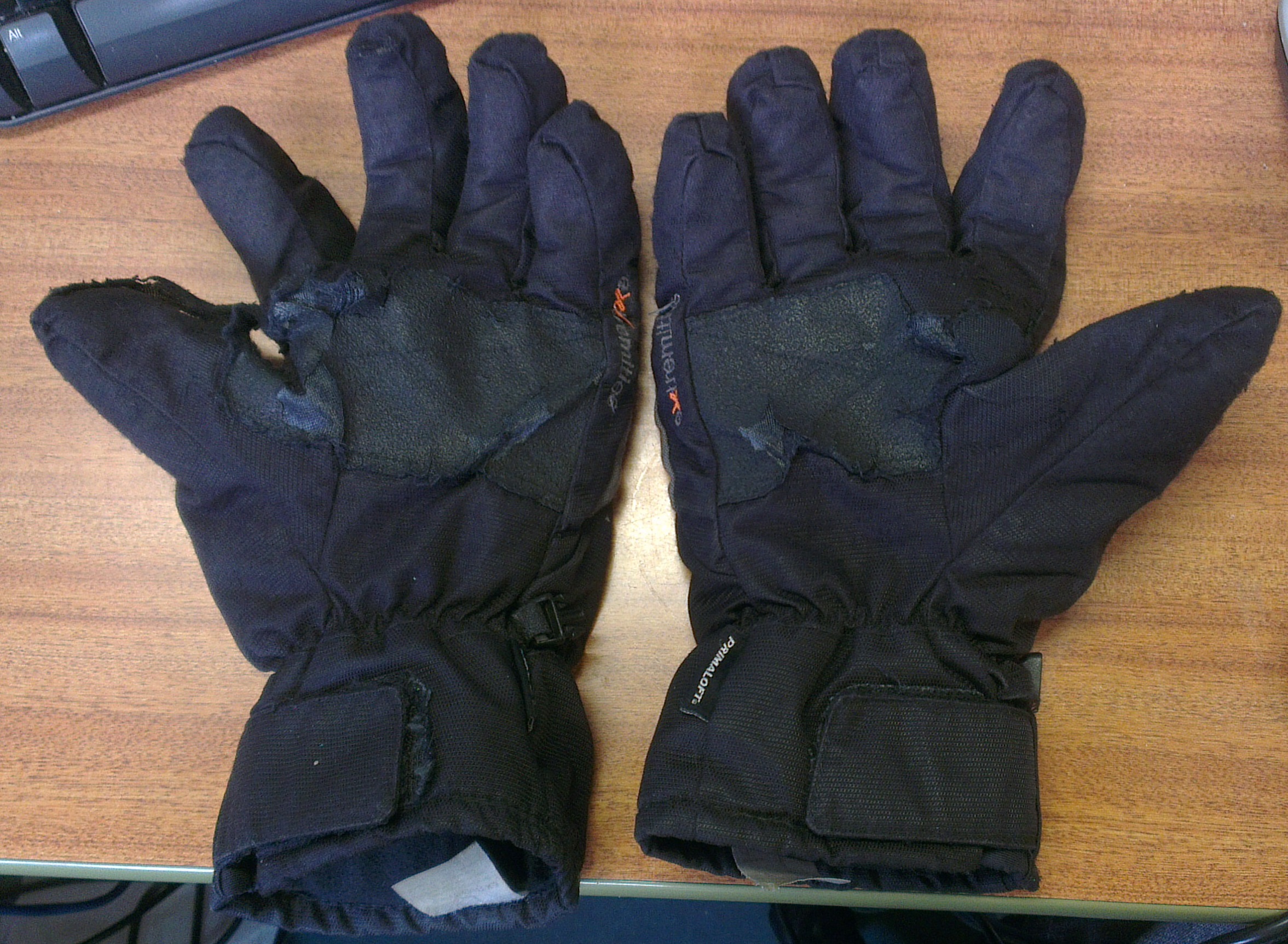 After four and a bit year's worth of use, my Extremities are just about hanging on in there!
Comments powered by Disqus