. View all photos from Zion, Bryce and Grand Canyons

A lot has happened since my last post, back in February. Most notably, Lorna and I have been on a six-week trip to the American West, and as of last week, I have submitted my thesis. The latter of these has been the driving force behind a considerable reduction in blog-post frequency recently; writing 200-odd pages about semiconductor physics left me with little desire to spend my free time doing even more writing! That being said, I can't deny that I've missed writing about our outdoor adventures, and we certainly haven't had a shortage of them recently. So, first up, here's a report about the Bryce Canyon 50k race I did when we were over in the USA. 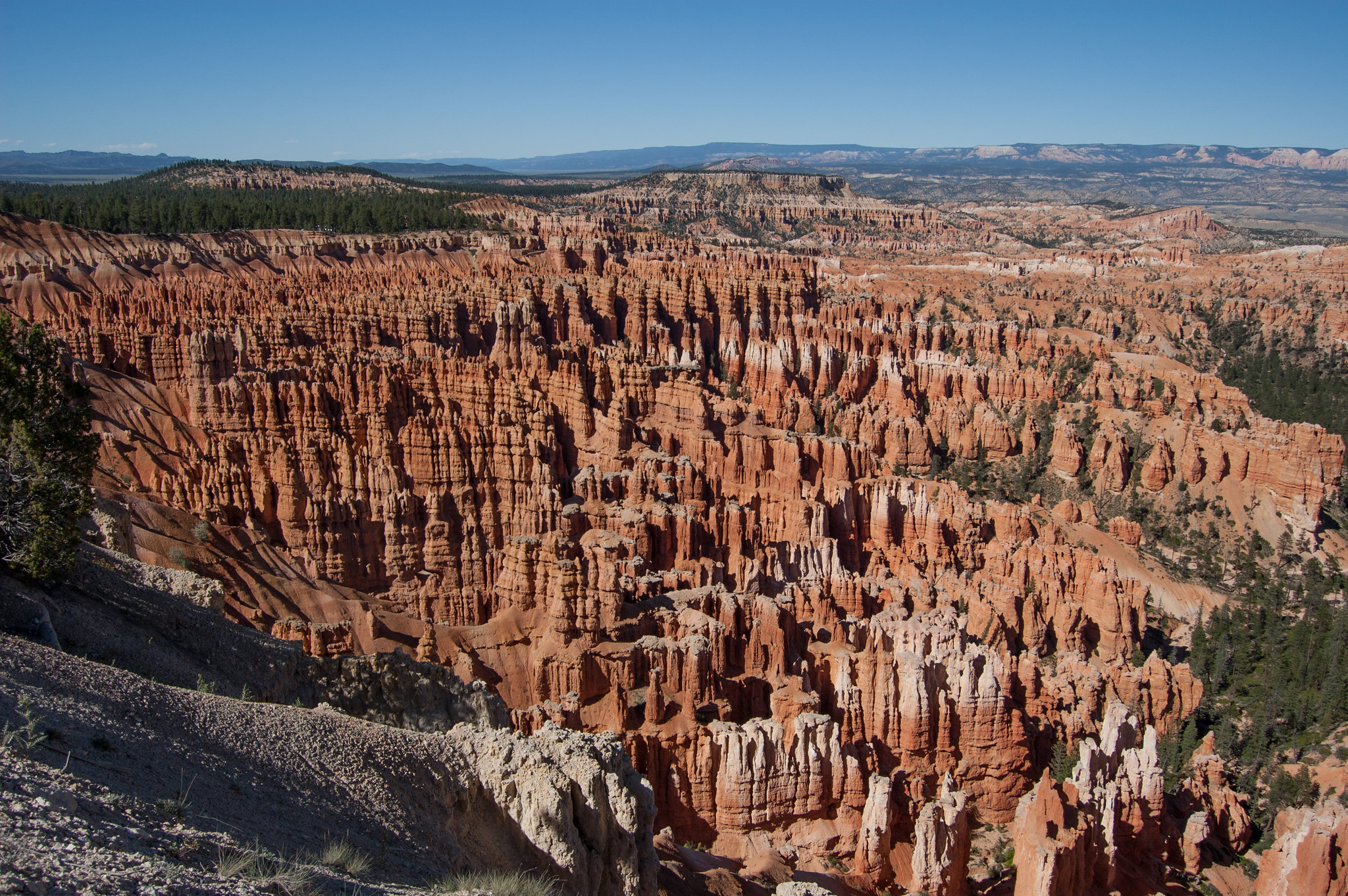 Sea of hoodoos in Bryce Amphitheatre.

Let's get the embarrasing bit over and done with first: Yes, I was meant to be doing the Bryce 50 mile race, and yes, I forgot to change my watch to Utah time, so yes, I was an hour late for the 50 mile race. Good job the 50k race was starting a few hours later. So, let's just pretend I was meant to be doing the 50k. I mean, who would mad enough to actually want to run 50 miles in that heat!?

Heat - yes. Lots of it. We'd timed our big American trip to coincide perfectly with a heatwave, and had been simmering nicely in 30-40 degrees celsius for the past few weeks. As race day got closer and closer, it became apparent that the heat wasn't going to abate and return to the average temperatures of the mid-20s that I had prepared myself for. I normally cope quite well with heat, but that heat has always been British "hot", not Utah "hot", and so I was a little apprehensive, to say the least.

Altitude was the other big question mark lingering over my head pre-race. I knew I was fit enough to run 50 miles 50 km, but had absolutely no idea how I would fare being up at around 8000 ft. Fortunately, we'd spent the previous few weeks residing at similar altitudes in Yosemite and on Mt Whitney, and a 20-mile training run from Tuolumne Meadows had helped reassure me that I'd be able to cope, albeit at a much slower-than-sea-level pace.

My third source of apprehension was a couple of injuries I'd acquired over the previous two weeks: The first was a weak ankle that I'd gone over on in Yosemite and had continued to go over on for pretty much every run since. Whilst it didn't hurt just running, I was aware that its weakness meant that (a) I was more likely to go over on it again, and (b) the potential for that to be catastrophic was pretty high. The second injury, I picked up whilst climbing Mt Whitney earlier in the week, and was self-diagnosed as a dodgy plantar fascia - that bit that connects your heel to the middle foot bones - which manifested itself as pain when I tried to put weight on my big toe, an action quite fundamental to running.

These thoughts were all going through my mind as we sat on the shuttle bus that drove us from Ruby's Inn in Bryce to the start line, at the heart of the Paunsaugunt Plateau. From there, the race route climbed its way gradually to the broad ridgeline of the plateau to join the 50- and 100-mile routes, which proceded northwards, first through sparse woodland and then out into the open and Bryce-like landscape of Thunder Mountain.

The pace at the start was slow and I had to restrain myself to not end up in first place - these guys knew better than me what was to come. The sun had only just risen and it was still a pleasant temperature as we worked our way up 4x4 tracks to the first aid station. I settled into a comfortable pace and found myself in around 20th position. I picked up some salty potatoes (a firm favourite) and a banana at the aid station and enjoyed the fantastic exposed single-track descent after it.

At mile 11, we joined up with the 50- and 100-mile routes. At this point my legs were feeling great and I soon went on an overtaking spree (though admittedly most of those I was overtaking were very tired-looking 100-milers, who had already been running for nearly 30 hours). By the Proctor Aid station, at mile 14, my legs were still doing okay, but the aforementioned injuries certainly were not. I'd subconsciously been correcting my foot placements since the start, to avoid putting too much weight on my toe, and that had the knock-on effect of throwing my leg out of alignment and causing considerable pain on the outside of my knee. Once I realised this, I started consciously placing my foot correctly again, but that of course meant that the arch of my foot had started to hurt. Furthermore, I'd predictably gone over on my ankle on a narrow bit of single track prior to the aid station and it was feeling decidedly dodgy.

Things got worse over the next 10 miles to the next aid station, and I felt my pace drop considerably. The day had really started to heat up and staying hydrated was also becomming an issue. I had plenty of water with me, but it's a very fine line between drinking enough to stay hydrated and not drinking so much that you throw up. I was managing, but certainly not comfortably. I settled into a group of us that were moving at a similar pace and took comfort in the fact that I wasn't the only one suffering with the heat.

The final aid station, Thunder Mountain, was a very welcome sight. I made sure not to rush on too soon and took a while selecting food that most appealed to me (salty potatoes seemed to still be doing the trick), whilst drinking a refreshing combination of coke and energy drink. The ankle seemed to have healed itself, but my foot certainly hadn't, and by now was in constant pain. On the plus side, it didn't seem to be getting worse, and looking back it might have had the positive effect of distracting me from tired legs and dehydration.

Thunder Mountain itself was agony, albeit a very beautiful agony. We were thrown out into the scorching midday sun (the temperature was in the mid-30s now) for the long climb up countless switchbacks, meandering our way through the stunning red rock architecture so typical of the region. Hoodoos, arches and huge monoliths kept us well distracted from the pain we were feeling. After what felt like an eternity, we reached the trailhead and all that remained was a mile-long trot down the forest track to the race finish. By this point, even running downhill was becoming an issue and all I could think about was how much I was looking forward to a can of coke at the finish. The finish didn't disappoint; in fact, I think I ended up having three cans of coke. Poor teeth.

I was surprised that my time of 6:30:05 had secured me 14th place out of 154 finishers. I'd calculated that based on my 3 Peaks time of 3:50 early in the year, sub-5 hours should have been well within my grasp. I guess the heat and altitude had much more of an effect on the whole field than I'd imagined. My foot was in agony at the end, but strangely within a few days it was completely back to normal and hasn't hurt since. Nothing like a 50k run to sort out an injury!

Lynne Taylor and Tim Budd, from Glossop, had also made the trip over the Atlantic for the race. Lynne finished the 50k race a little behind me, as 22nd women, and Tim had a storming run to come 3rd place in the 50 mile race. Full results available here. I haven't got any photos of the race itself, so have sprinkled this post with some other photos of Bryce Canyon's impressive rock architecture.

. View all photos from Zion, Bryce and the Grand Canyons 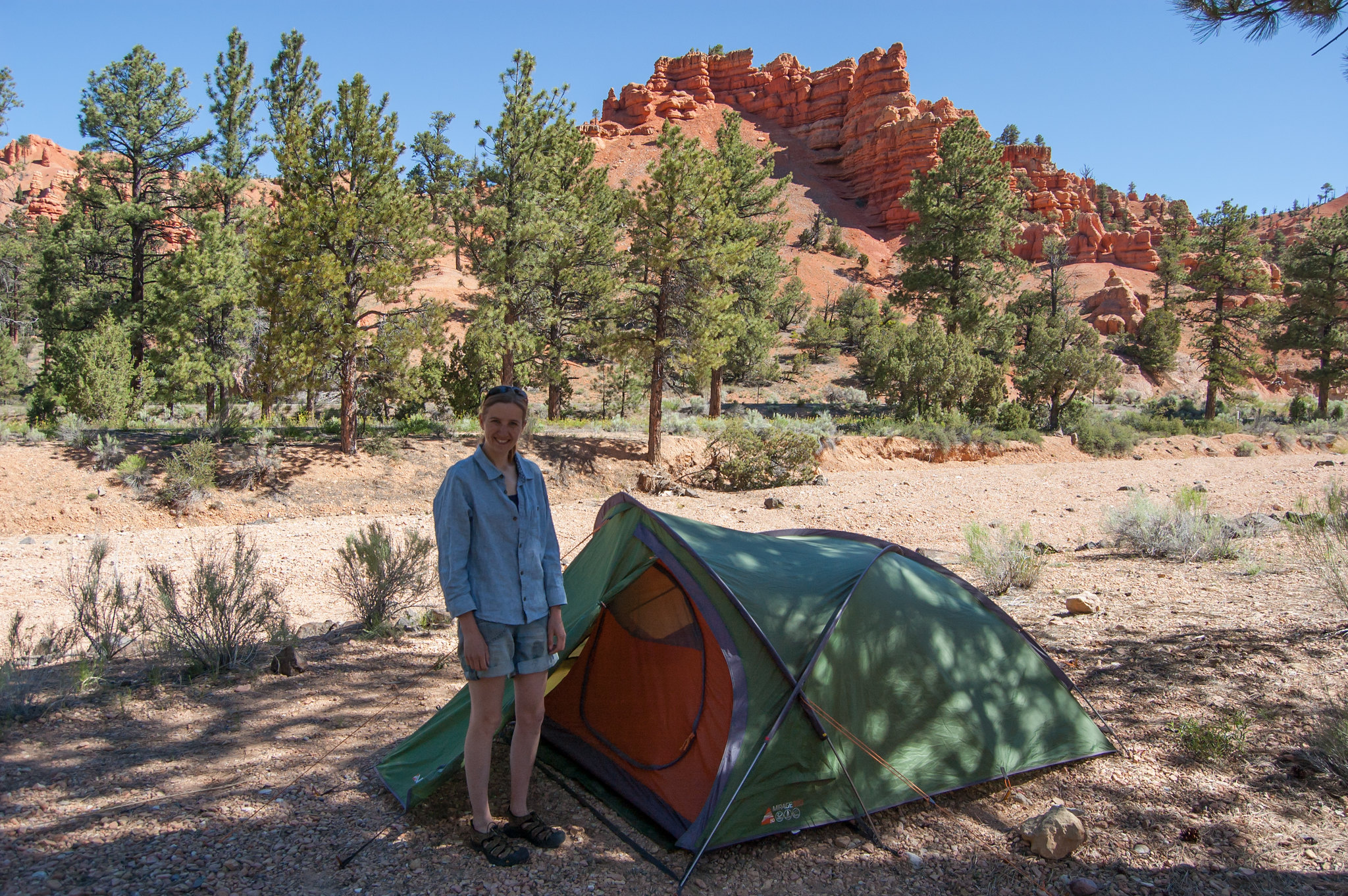 Red Canyon campground, just outside of the National Park.
Comments powered by Disqus