. View all the photos on Flickr     . Skip to route description

More changable weather was forecast over the weekend, with the only clear morning looking like it would be Tuesday. Our next plan was to attempt the Gran Paradiso from the Rifugio Emmanuelle in the Valsavaranche valley (the next along to the west of Valnontey) and it was looking like Tuesday would be our best shot at doing so. We'd hoped initially to spend a few nights at the hut with a view to climb other interesting-looking mountains in the area, such as the beautiful Ciarforon, but torrential rain had been forecast and so we didn't think it was worth forking out an extra €10 each in the hope that the forecast was completely wrong.

Gran Paradiso is supposedly one of the easiest 4000m summits in the Alps, but it nonetheless brings with it all the seriousness and difficulties any mountain of its size does; variable snow conditions, fast-changing weather and the effects of altitude to name but a few. Whilst traditionally graded at Facile (the easiest of the Alpine grades), I don't think it would be unfair to up that grade to at least PD-, owing not just to the aforementioned characteristics of a big mountain, but also because it isn't simply a snow plod and instead has an (albeit short and bolted) exposed section of UIAA II climbing to reach the summit.

The forecast was becoming reliably unreliable by this point, and so we weren't surprised that rain was still lingering around first thing on the Monday morning. We'd caught the "Trek Bus" (which is less of a bus and more of a taxi) around to Valsavaranche, and its peculiar timetabling meant the latest we could arrive was 9am. Darren's parents - who were doing a trekking tour of Gran Paradiso - met us at the campsite and we all decided it would be best to hide away from the rain in the nearby cafe-cum-pizzeria. A few hours passed, as did the rain, in time for us to make our way up to the Rifugio Vittorio Emanuele and still have plenty of time to check out the start of the following day's route on the morraines of the Glacier du Grand Paradis. As self-catering guests, we were shunned away to the winter refuge, which had seen better days. The advantage of this was that we weren't restricted by the breakfast times set by the hut and could set out at 3.30am, gaining a 1.5-hour headstart on most other parties. We'd been warned to expect queues on the summit and were keen to avoid this! 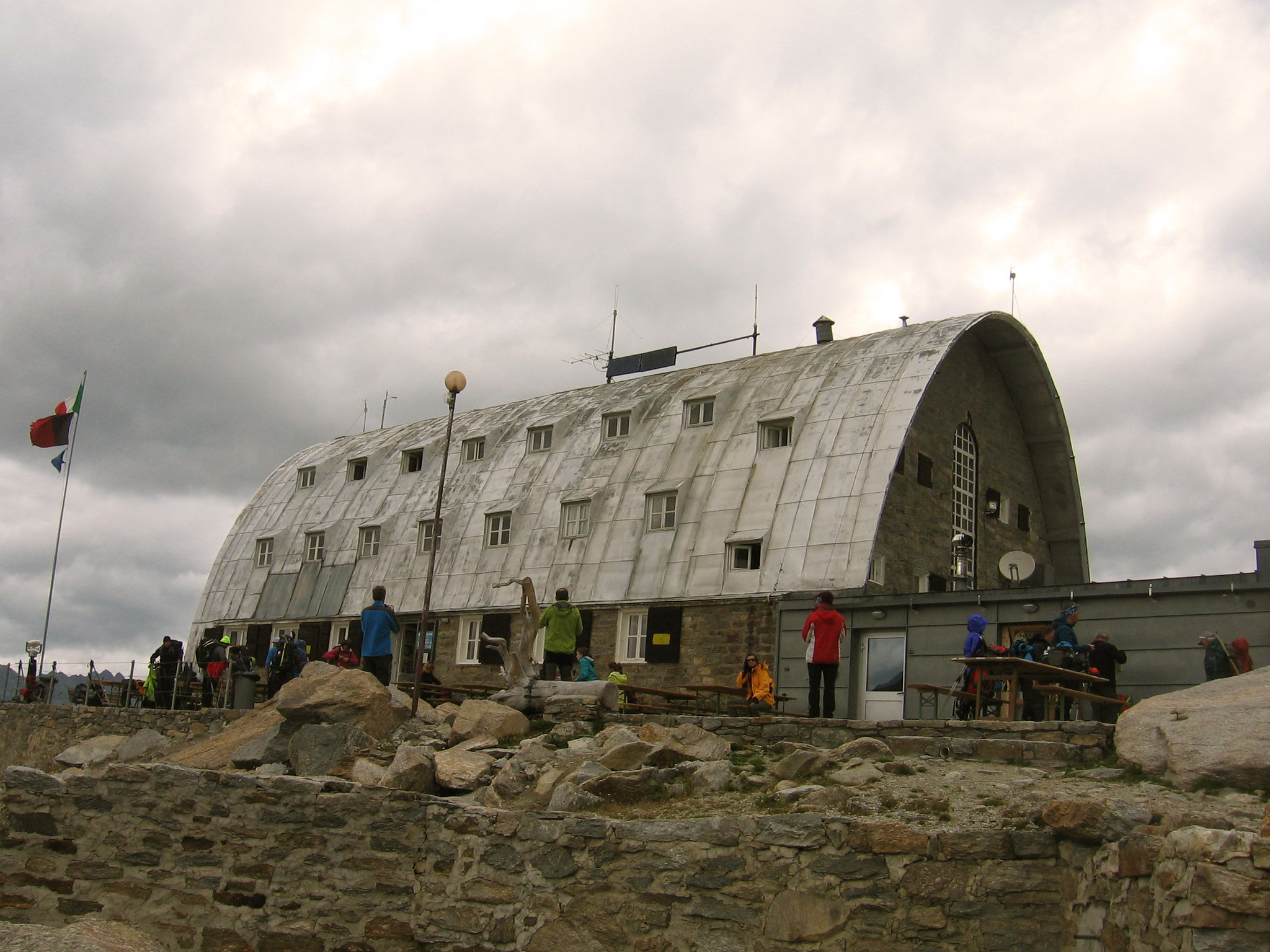 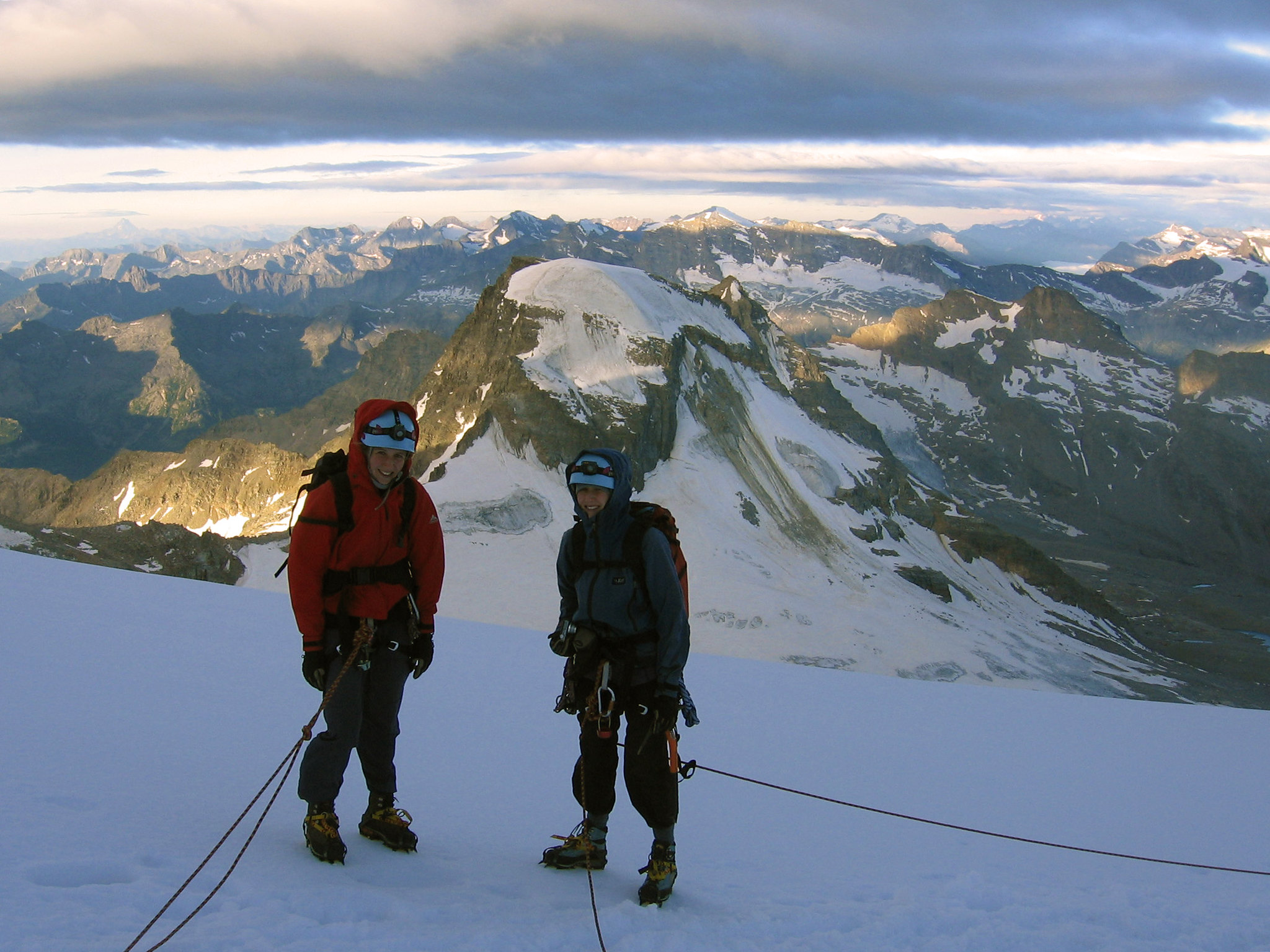 Lorna and Imogen with Ciarforon in the background.


But unfortunately we never got that far; after making cracking progress up the glacier, slowly gaining on the only group to have set out before us, the wind had picked up and by the time we reached 3847m, it had started to become a danger rather than just a nuisance. Clouds were wipping over the summit rocks and the skies in the distance suggested things weren't going to improve. An exposed summit wasn't the place to be today and so a group decision was made to turn back. I was reminded of meeting Alan Hinkes a few months back, when upon being asked how he had survived climbing all of the 8000m peaks (with all fingers and toes intact), he answered that he knew when to turn back.

An hour or so after turning back, we started passing the (literally) hundreds of others making a stab at the summit that day. Some had only just arrived at the glacier when we reached the morraines and if they ever made the summit it certainly wouldn't have been before midday.

We spent the afternoon relaxing at the hut, before walking down to Valsavaranche for further relaxing - including another visit to the cafe - before the Trek Bus picked us up at 7pm.

I thought it was worth including a bit of further information about the early stages of route we chose up and down the mountain, which prove the most problematic navigation-wise. An easy-to-follow path leaves the refuge by a large sign saying "Gran Paradiso", immediately crossing a large boulder field, before gaining a steep morraine slope which a number of paths zig-zag their way up. It's worth checking this section out the evening before, though there is little scope for going wrong as the paths are all good and well-cairned, all converging in the same place at the top of this steep section of morraines.

The route flattens out and you enter a rocky bowl with a large stream on your left (north) and an obvious ridge-line behind that. One set of cairns takes you straight across the stream and up onto the ridge (red routes on the photograph), following the ridge up to the Glacier du Gran Paradis via a section of Via Ferrata. It would also be possible to cross the ridge to the Glacier de Laveciau, or descend back to the Glacier du Gran Paradis before the Via Ferrata section. More details on these routes available on Camp to Camp (albeit in French).

The other cairns lead across the rocky bowl (yellow routes on the photograph): In 2014, the stream could be crossed at the east-most point of the rocky bowl, before the snows of the glacier begin, leading onto a series of rocky shelves through which hundreds of cairns lead you in all sorts of directions; try to pick the best of these and you'll somehow end up at the glacier, having missed out its lower reaches which can be difficult in marginal snow cover. This seemed to be the way most guided groups were ascending, and is the way we descended.

The final option is to carry on straight to the back of the rocky bowl and gain the snow, though where this is obviously will depend on conditions. There may be a few rocky steps to negotiate as the valley narrows before it broadens out to where the aforementioned routes reach the glacier. We ascended this route and were presented with a tricky step involving a bit of icy waterfall scrambling; not too pleasant first thing in the morning! This route does have the advantage of being the most direct and we felt that it was quicker than any other options. Whether or not it's "in condition" is something you'll have to gauge for yourself.

From here on up, it is a simple (but long and tiring) glacier plod following a large trench for the most part, until you reach the exposed summit rocks with a few steps of UIAA II (bolted) to reach the summit itself. 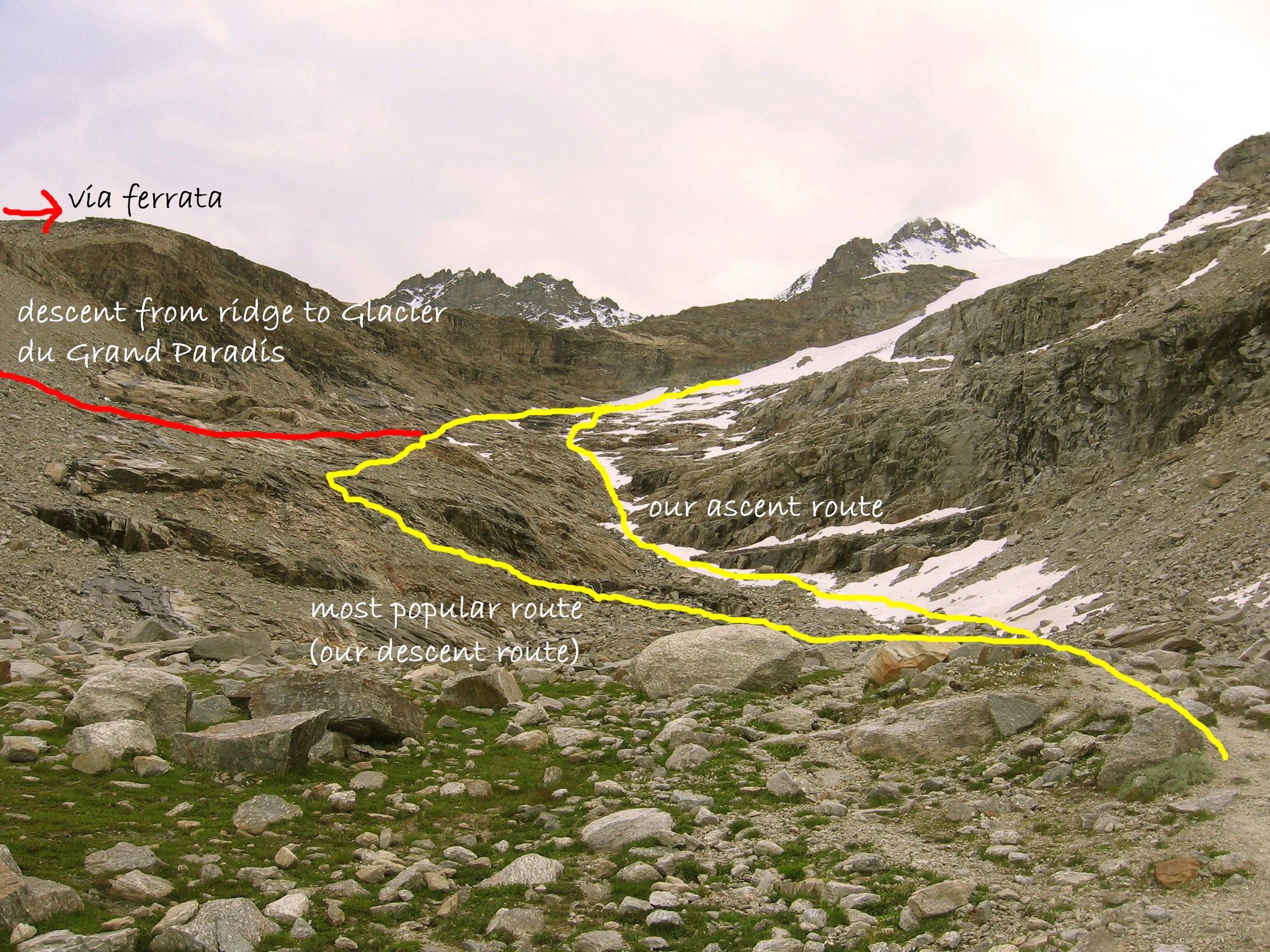 . View all the photos on Flickr
Comments powered by Disqus